Rugby 7s is an exciting and dynamic sport that requires different strategic approaches, relying on a team’s unique combination of players and positions. Seven players on each side use the same basic positions as traditional rugby, but the focus is on fast play with fewer players.

The game requires athletes to be incredibly versatile in order to best utilize their skills and maximize team performance. Understanding the different positions and the responsibilities of each can help any team successfully compete. This blog post will outline the various positions in rugby 7s, their responsibilities, and the skills necessary for success in each role. With this knowledge, teams can work together to create a cohesive, effective unit and maximize their potential as a team.

In Rugby 7s, there are seven players per side, each with a specific position. The forwards, who make up the majority of the team, are responsible for providing most of the power in the game. As the players closest to the action, the forwards usually carry the ball, win back possession, and are the first line of defense.

The Halfback is the playmaker of the Rugby 7s team. This position requires a player to be able to read the game and make decisions on the fly. The Halfback is responsible for leading the attack, launching counter-attacks, distributing the ball, and providing direction to the team.

They usually have the most touches on the ball, so passing accuracy is essential. The Halfback must be able to switch quickly from offense to defense and work in unison with the other players. This position requires a player with excellent vision, passing ability, and decision-making skills.

The Centre position in Rugby 7s is a key component of the team, as the Centre is responsible for making important decisions on the field. The Centre should possess the ability to read the game and be able to make the right calls in order to move the ball forward.

They are typically the most experienced players on the team and they should be able to make good decisions on the fly. It is important that the Centre is quick and agile, as they will be responsible for defending and attacking in both halves of the field. Additionally, the Centre should have a good kicking game as they are often relied upon to kick the ball out of their own half when they are under pressure. 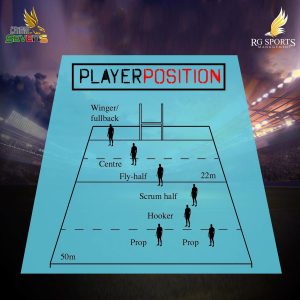 The wing position in Rugby 7s is one of the most important positions in the game. This position requires a player to have great speed, agility, and lateral movement, as well as good passing skills.

The wing is usually the player who will make the most tackles as they are in the most advanced position. The wing should be able to read the game quickly and make decisions quickly as they have to cover the most distance on the field. The wing is also responsible for covering the wings of the opposition, which can be the most difficult task of all.

The fullback position in rugby 7s is one of the most important positions on the field. The fullback is responsible for providing last-line-of-defense coverage against opposition attacks, making sure that the opposition cannot advance past their line of scrimmage. The fullback needs to be a good all-around player, with good physical and mental abilities, and must be able to read the game quickly and accurately.

In conclusion, Rugby 7s is a great game for all ages. Each position requires a different set of skills and teamwork is the key to success. Scrums, lineouts and rucks are integral parts of the game and understanding their importance can help you to be a better player. With practice, you will be able to master the different positions and enjoy the sport.